Processing 120 film with excessive curling can cause the film to jam or be damaged when loading into spiral reels for tank development. The following is a description of how I load 120 film with excessive curl into a daylight film tank for processing. Obviously all the steps shown must be completed in total darkness, ie in a darkroom or using a changing bag. I suggest you try this on a practice film before you try loading an important film.

I have been processing 120 films for several decades. In that time I have used stainless steel reels, Paterson reels and my current favourites, the Jobo duo reels shown here. These “newer” Jobo reels are made of white plastic rather than the earlier clear plastic reels. Unlike Paterson, Jobo reels do not have any ball bearings at the film loading mouth to engage the film edges. Unlike other reels, Jobo has two indented reel edges, one on opposite sides of the reel, where my finger is pointing. This is important as it allows the edge of the film to be contacted by your fingers within that small range of indent.

In a darkroom or change bag collect all the items necessary to start film loading. You will need daylight film tank and top, the white plastic film reel with its black central column and of course the roll of film. In total darkness, tear the thin paper tab securing the exposed roll and begin to unroll the backing paper away from the film spool.

After about 10 to 15cm of backing paper is unrolled, the loose end of film will begin to curl into a small tight roll. The film is thicker than the paper backing and is firmer, so you will feel the difference between the two. Unless touching the very first of last 2cm of film, always handle the film at its edges.

Notice how the film below is already curling in on itself to form a tight shiny roll. This action can make 120 and thinner 220 films particularly troublesome to load at times without scratching or jamming in the reels. The degree of curl will vary from film to film, brand to brand,  and manufacturers may change the polymer base without notice. When you have just 5 or 6cm of film unrolled from the backing, pinch the very top centre leading edge of the film with the finger and thumb of one hand and with the other holding the film reel and film roll,  pull the leading edge of film under the entrance lips into the very first reel track. (I do not recommend cutting the corners of the leading film edge as this will make loading in this reel more difficult with a curling film).

Again using finger and thumb to grab the leading centre edge of film and pull the film into the reel past the indents, whilst holding the main film body and backing in place with the other hand. Continue pulling the film around as far as you can. You will have to unroll some of the backing paper from time to time to free up the film so it will enter the reel freely.  You can let go of the main film roll once you have a good 10 to 15cm of film in the reel  as this should be sufficient to hold it. Paterson reel users will be familiar with the backwards and forwards ratcheting movement of the reel halves to load film. A similar affect on the Jobo reels can be achieved using index fingers on each side of the reel at the indent points, as you alternatively advance and then hold the film. I do not recommend this method with excessively curly 120 film as it is likely to pop the film edge out of the film guide channel, causing the film to jam. 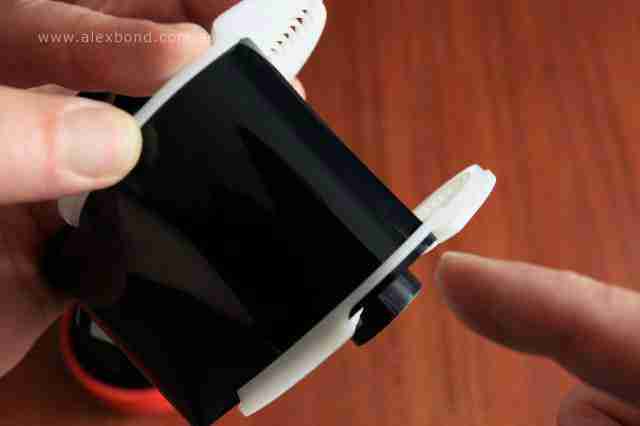 Keep repeating this pushing /feeding action, it is surprising quick to load a whole film. The even pressure on both side of the indent prevent the film from popping out of the guide channels. From time to time release more backing paper away from the film and reel to make it easier to push / feed the film into the reel. You can feel the film edge traveling deeper into the reel at the indent. Leave the sticky tape on the film and fold its sticky edge down onto the under side of the film. Push/feed the remainder of the film right into the reel so that the taped edge is under the guide lips. You are just about done. Load the film reel and central column into the daylight tank. Place the lid on top and secure. Turn on the lights or remove the tank from the change bag. You are now ready for processing 120 film in the tank under normal room light. Since 1989, Alex Bond has published cards, calendars, books, and posters under his imprint Stormlight Publishing. His images showcase the West Australian environment. Bond's handcrafted, silver-gelatin, fibre-based prints are personally made by the author in his darkroom.
Articles: 109